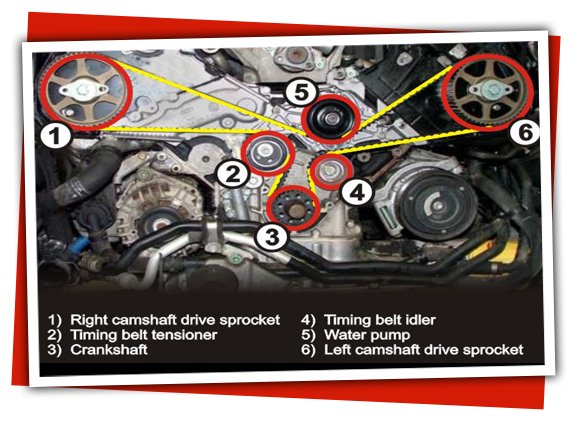 The internal combustion engine, except for the Wankel type motor, need a way of keeping the valve train (engine valves) moving in time with the pistons and therefore, the crankshaft for which they are connected. There are several methods of accomplishing this. A timing belt, or cam belt (informal usage), is a part of an internal combustion engine that controls the timing of the engine’s valve train in relation to the crankshaft . One method, is using timing gears. Some engines, such as the flat-4 Volkswagen air cooled engine, and the straight-6 Toyota F engine use timing gears. Another method, is using timing chains. Some manufacturers, such as BMW, Porsche, Nissan, and Mercedes, are known for mostly utilizing timing chains, because of their durability. The other method is by using timing belts. Timing belts were commonly used by Audi, Volkswagen, some Porsches, Ferrari, and Maserati.  They were chosen for their quietness in operation and lighter mass, which helped by freeing up additional horsepower. The timing belt replaced the older style timing chains that were common until the 1970s and 1980s (although in the last decade there has been some reemergence of chain use). The term “timing belt” is sometimes used for the more general case of any flat belt with integral teeth, although such usage is a misnomer since there is no timing or synchronization involved. The downside to timing belt usage is that they must be serviced at regular intervals or the car may risk permanent and costly engine damage if they break or lose teeth due to age and wear. Sprint Motorsports specializes in Timing Belt Service.

In the internal combustion engine application, the timing belt/chain connects the crankshaft to the camshaft(s), which in turn controls the opening and closing of the engine’s valves. A four-stroke engine requires that the valves open and close once every other revolution of the crankshaft. The timing belt/chain does this. It has teeth to turn the camshaft(s) synchronized with the crankshaft, and is specifically designed for a particular engine. In some engine designs, the timing belt may also be used to drive other engine components such as the water pump and oil pump (internal combustion engine).

Timing belts must be replaced at the manufacturer’s recommended distance and/or time periods. Preferably, every 75,000 miles or 6 years. Failure to replace the belt can result in complete breakdown or catastrophic engine failure.

To schedule an appointment for auto repair, major or minor service, please contact service@sprint-motorsports.com or 408-831-3730. We welcome you to stop by our auto repair shop at 2099 S 10th St, Unit 40, San Jose, Ca 95112. If you have any questions about your car’s performance or maintenance, don’t be shy about asking our friendly staff for assistance.